Although I have never been a chess player I have always been fascinated by the various elements which constitute this game. Looking at the black and white chess board or the shapes of the various pieces I feel as if something very old and mysterious has been hidden behind those symbols. The origins of this game are not so clear, but it is well known that board games can be found all over the ancient world with records which stretch back as far as 5,000 years ago (i.e. in Egypt). It is very likely that the âancestorâ of this beloved board game was from the East and most likely from India. We also know of its connection with war, military strategies and the Kshatriya (warrior) caste. As India has always been associated with metaphysical teachings I wanted to see what symbolic connections could be found in this game.

One of the Sanskrit names for chess is Chaturanga, which means, four-limbs or four-membered. In Indian metaphysics the number four is very holy and we find names like : Chaturveda (4 Vedas), Chaturyuga (4 world ages), Chaturvarna (4 castes), etc. There are also references to a four-handed chess called Chaturaji which derives from the word Chaturmaharajikas (4 great kings). This game was played by four players with pieces in four colours (see fig. 1). The pieces included in the four-players chess are: the King, the Elephant (which in the modern chess has become the Bishop), the Horse, the Boat (now the Castle) and the Pawns.

The arrangement of the pieces reveals the four cardinal directions (East=Green=Spring, South=Red=Summer, West=Black=Autumn and North= White or Yellow=Winter) of the manifested space or the visible world (symbolised by the square-shaped board), where the various âformsâ and energies of life (symbolised by the pieces) interact and âplayâ together the drama of life. Each colour and each cardinal direction is obviously linked to an Element (Fire, Air, Water and Earth) where each group is a host of Elementals headed by its chief Deva (God) or King (see Buddhist mythology of the four kings). The fifth âdirectionâ and its corresponding element (Akasha in Sanskrit) resides in the centre of the board (i.e. fig. 3). Those four groups of pieces can also be interpreted as the four seasons (the pieces were moved in a rotatory direction, analogous to the movement of the sun - starting with the green pieces), the four castes and the four kingdoms of Nature. The movement of the four camps (groups of pieces) symbolizes cyclical transformation and the spinning of the Wheel of Law (Dharmacakra in the Buddhist tradition).

In a different interpretation, within each coloured group we find again the four elements (Boat/Castle=Earth, Horse=Water, Elephant/Bishop=Air and King=Fire), the four castes (Shudras=Earth, Water=Vaishyas, Air=Brahamins and Fire=Kshatryas) and a fourfold constitution of Man (Earth=Physical, Water=Energetic, Air=Emotional and Fire=Mental). Without going into too much detail, leaving to you the task of working out other interesting correspondences, let us now take a closer look at our âmodernâ chess (see fig. 2). I put the word âmodernâ in brackets because itâs not so clear which of the two versions is older, it might well be that the two players chess is even older than the one just described.

The chess board is made up of 64 (8 X 8) black and white squares. In India this is the form of the most important of the Vastu Purusha Mandala - the Maduka Mandala (fig.3), which symbolises the metaphysical plan of a building. It can be interpreted as the building or the body (or rather, the âformâ) of Man (archetypically considered - see Adam Kadmon in the western tradition) or the Microcosm (in this respect, see Vitruvius and Leonardo Da Vinci). 64, as with the number of hexagrams in the I Ching, thus symbolises all the existential possibilities of a human being and the various stages necessary to fulfil the Archetype Man . The number 8 is the symbol of infinity, like the symbol of the circle, and is related to an entire Aeon or cycle of being. Therefore this mandala can also be interpreted as the complete form of a World or a Cosmos.

On the chess board, the squares are alternatively black and white, representing the eternal play of the Yin and Yang polarities, as well as the âimageâ of the world and of Man (if we include the chessmen) in its fundamental duality. The chess board has now become a âbattlefieldâ (the Kurukshetra of the Bhagavad-Gita). The combat which takes place, between the two sets of pieces, in its most universal meaning, is the combat of the Devas with the Asuras, of the âangelsâ with the âdemonsâ, of the Pandavas with the Kuravas. On a more practical level, this represents either the everyday battle we fight against external foes (even what we call loved ones) or the battle of our lower/animal nature with our higher/divine nature. These are the two forms of the âholy warâ; the âlesser holy warâ and the âgreater holy warâ mentioned in the Koran as well as in the Bhagavad-Gita.

If the significance of the different chessmen is transposed into the metaphysical domain, in the light of what we have also mentioned about the elements, the King becomes Akasha-Spirit, the Queen (which in the original version was the Minister or Kingâs counsellor) becomes Fire-Mind-Manas, the Bishop is Air-Emotional and so on. Their movements correspond to different ways of realizing and actualizing the cosmic as well as the earthly possibilities represented by the chessboard. In this respect, it is interesting to note, for instance, how much freedom of movement has been given to the Queen, stressing the western-mental approach to life. It is also interesting that the King (Spirit or Soul) cannot be killed, but can be imprisoned.

I think that one question will surely arises in the readerâs mind: what about the pawns ? They are the slow movement of ordinary man who will eventually conquer the stage of Mind (become the Queen), but also the various stages of ânaturalâ evolution (i.e. the evolution of the Elemental world). They are also functions or aspects of Man in continuous development and therefore they move only forward.

In the current state of affairs, I think that the game of chess has become a bit too âlogicalâ and âdryâ, so I hope that with this short article I have ignited in you a kind of symbolic imagination and have emphasized the need, today more than ever, for contemplation and intuition. I vividly invite you to study other symbolic treasures which can be found in the game of chess as well as in many other old games. 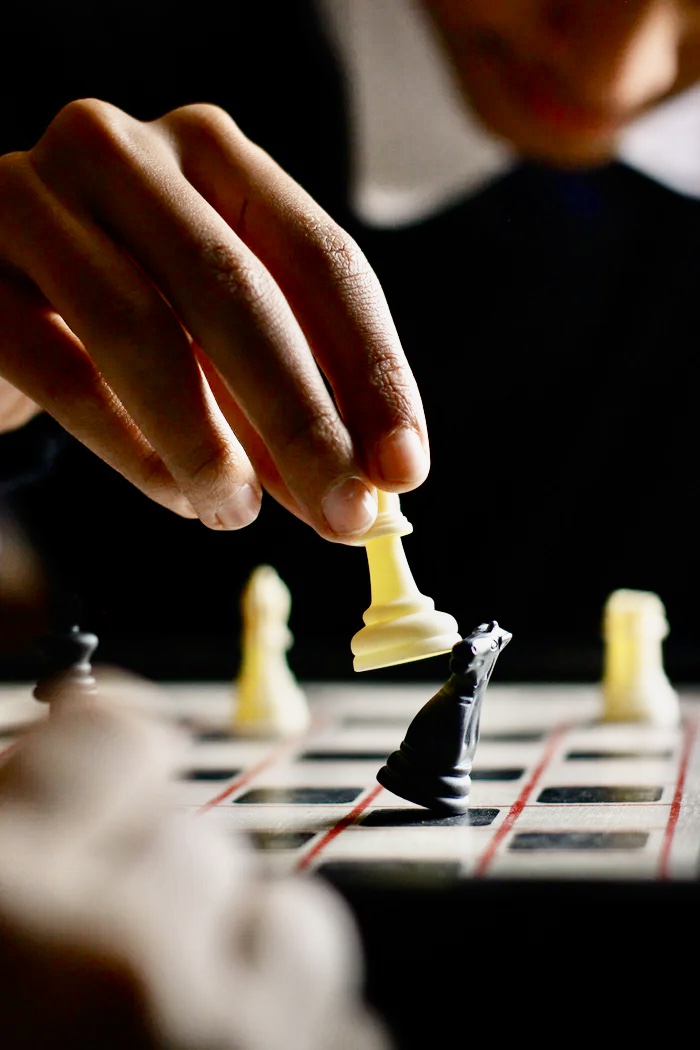